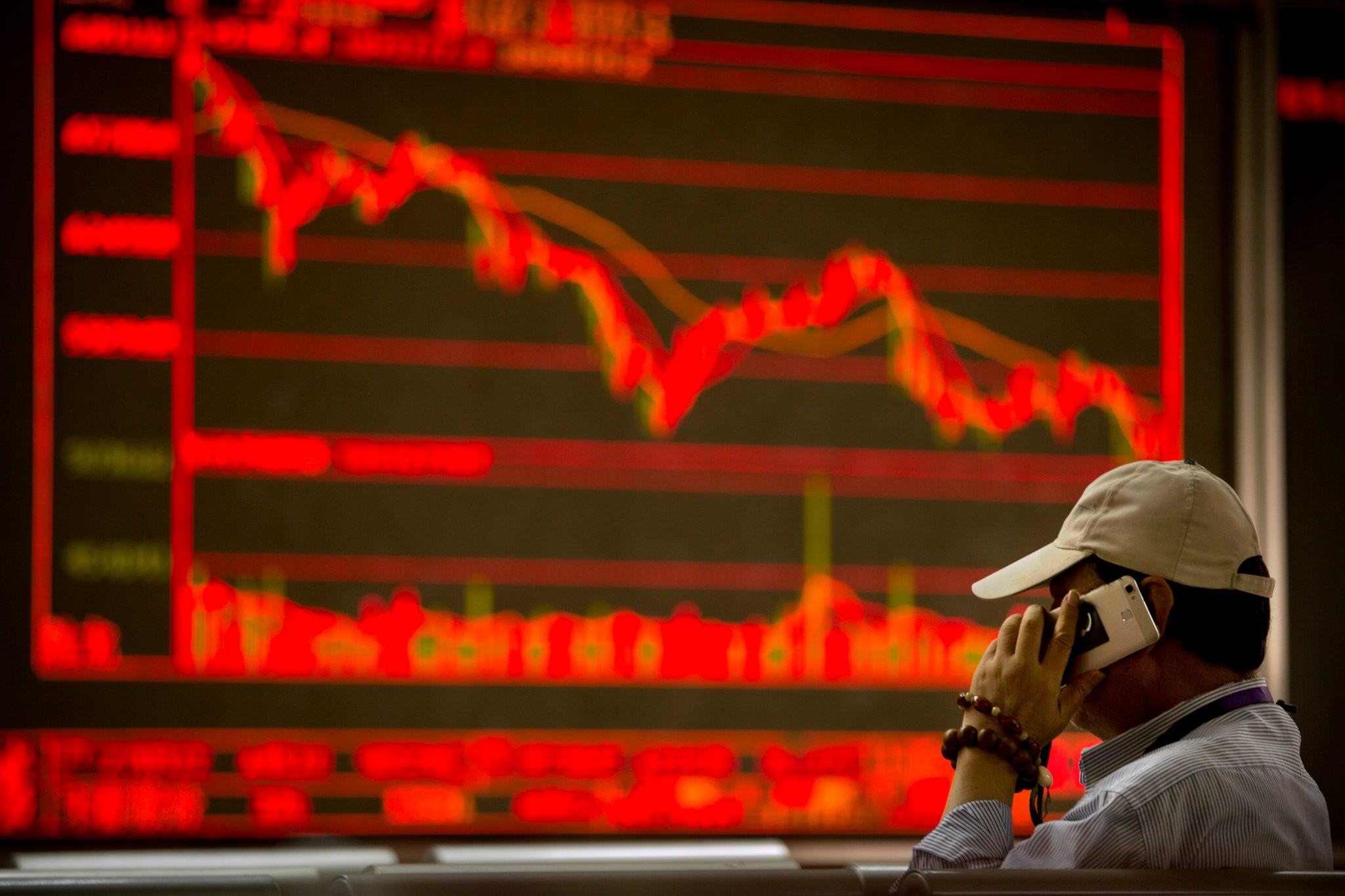 BEIJING — China’s leaders have sought to project confidence in the face of President Trump’s tariffs and trade threats. But as it becomes clear that a protracted trade war with the United States may be unavoidable, there are growing signs of unease inside the Communist political establishment.

In recent days, officials from the Commerce Ministry, the police and other agencies have summoned exporters to ask about plans to lay off workers or shift supply chains to other countries.

With stocks slumping and the currency dropping 9 percent against the dollar since mid-April, censors have been deleting a torrent of criticism online, some of it directed at President Xi Jinping’s leadership.

State news outlets, by contrast, have sought to promote the official line, with the authorities restricting the use of the phrase “trade war.”

Still, policy disputes over how to bolster the economy have at times spilled into the open, with the state media sometimes coming under attack for boasting about China’s economic strengths.

If the trade war escalates — and Mr. Trump has shown no sign of backing down — some worry that the public’s faith in the economy could be shaken, exposing the nation to much more serious problems than a drop in exports. New economic data on Tuesday showed slower growth in investment and consumer spending, and there are fears that the financial crisis in Turkey could spread.

China’s leaders have argued that they can outlast Mr. Trump in a trade standoff. Their authoritarian system can stifle dissent and quickly redirect resources, and they expect Washington to be gridlocked and come under pressure from voters feeling the pain of trade disruptions.

But the Communist Party is vulnerable in its own way. It needs growth to justify its monopoly on power and is obsessed with preventing social instability. Mr. Xi’s strongman grip may be hindering effective policymaking, as officials fail to pass on bad news, defer decisions to him and rigidly carry out his orders, for better or worse.

Beijing has already had to shift course once, edging away from threats to match American tariffs dollar for dollar. Confronting the possibility that the tariffs may remain for months or years and that Chinese access to the American market could tighten further, Mr. Xi does not appear to have settled on a strategy for limiting the damage or for persuading Mr. Trump to negotiate a deal.

Some inside the government have argued China should be more aggressive and put Mr. Trump on the defensive, while others have proposed concessions to address American complaints, said Chen Dingding, a professor of international relations at Jinan University in the southern city of Guangzhou.

He said the debate was “a healthy development” because it would “inform the public and make policymakers better.”

Others said it reflects indecision or political weakness on the part of Mr. Xi, who seemed unassailable in March when the Communist leadership abolished the presidential term limit.

“All of this coming together suggests Xi’s grip on authority has been loosened,” said Willy Wo-lap Lam, a longtime observer of Chinese politics at the Chinese University of Hong Kong. “He’s unable to fill his function as the final arbiter who settles differences among his closest advisers.”

It is unlikely Mr. Xi’s position is in any jeopardy. But the trade dispute, along with a scandal over tainted vaccines and protests over failed investments, have already emboldened some critics of his sweeping centralization of power.

“The recent Sino-American trade war has, in particular, revealed underlying weaknesses and the soft underbelly of the system,” wrote Xu Zhangrun, a law professor at Tsinghua University in Beijing, in a denunciation of Mr. Xi’s hard-line policies that was shared widely despite censorship. “All of this has only served to exacerbate a widespread sense of insecurity in society at large.”

In public, the leadership has argued that China can weather the trade war with ease. A widely circulated study by economists at Tsinghua University estimated that the tariffs imposed so far and those threatened would trim only 0.3 percentage points from China’s growth rate, which has been running at a robust 6.7 percent.

Even so, the government last month requested that dozens of research institutes and universities each submit analyses on how different regions and industrial sectors would be affected if the trade war worsened and what the impact would be on unemployment and the financial markets.

China sold roughly $500 billion worth of goods to the United States last year, accounting for nearly a quarter of its total exports and about 4 percent of national economic production.

If the United States imposes tariffs on all Chinese goods, even pessimistic Chinese economists contend the country might suffer only a 1 percent drop of output from lost exports. China so dominates some industries, such as smartphone manufacturing, that tariffs may not do much damage. In other industries, China might lose business to rivals like South Korea but find opportunities to export its goods to other markets.

While factories that make price-sensitive electronics and other electrical products are already beginning to lose orders, China is so competitive across so many sectors that exports to the United States are actually still rising despite the relatively limited tariffs that have taken effect.

The worst case for China, however, is that the trade war undermines economic confidence. The nation’s housing market teeters on a mountain of debt, and low-interest loans from state banks have built overcapacity in many industries. The worry is that prolonged trade tensions could cause money to rush out of China despite currency controls and prompt much bigger financial and economic troubles.

Censors have quashed discussion of such scenarios. There also has been almost no news coverage of the substance of American complaints about China’s trade practices. Instead, the state news media have been ordered to stop mentioning Made in China 2025, the industrial plan to transform the country into a high-tech superpower that Washington has criticized as unfair and predatory.

To the extent there has been finger-pointing in the establishment, the focus appears to be less on China’s trade practices than on its propaganda message. Some analysts have argued that the trade war could have been avoided if Beijing had refrained from triumphalist rhetoric about China’s rise as a global power. That rhetoric is closely associated with Mr. Xi himself.

“There’s a lot of second-guessing about whether the great leader played his cards right,” said Jerome Cohen, faculty director of the United States-Asia Law Institute at New York University.

A group of alumni from Tsinghua, one of China’s most prestigious universities, recently circulated a petition calling for the dismissal of a well-known economist on the faculty who is an ardent defender of Mr. Xi’s policies. They accused the scholar, Hu Angang, of misleading the leadership by arguing last year that China had already surpassed the United States as an economic and technological power.

The petition appeared weeks after a series of articles in the official People’s Daily newspaper mocked scholars and pundits making similar boasts about China’s strength.

“A slowing economy and friction with the United States provides an opportunity for people to push back,” said Trey McArver, a partner with Trivium China, a research consultancy in Beijing and London.

As the trade dispute festers, Chinese business leaders have been circumspect, saying almost nothing about it publicly for fear of angering Beijing. It is clear, though, that they and government officials were caught off guard.

“Outside of government negotiators, few people took this possibility very seriously until July 6,” said Yu Yongding, a prominent economist at the Chinese Academy of Social Sciences, referring to the date when tariffs on $34 billion of Chinese goods took effect.

Scott Kennedy, a scholar at the Center for Strategic and International Studies in Washington, said the assumption that Beijing could avoid a trade war “suffused every conversation” he had with officials earlier this year.

“They were wrong, and they are smarting over that, trying to find north and recalibrate,” he said.

Tensions inside the government flared into the open last month when Xu Zhong, the research director of China’s central bank, published an essay rebuffing calls to bolster the economy by issuing more money. He castigated the Finance Ministry instead for a “dearth of effective fiscal policies,” referring to extra government spending and tax cuts.

Soon afterward, the cabinet ordered more infrastructure spending to shore up growth. In the past week, the central bank has also pumped tens of billions of dollars into the economy and driven short-term interest rates down sharply.

Presented with a choice of fiscal or monetary stimulus, the leadership in effect avoided making a decision by choosing both, despite the risk of exacerbating the nation’s budget deficit and chronic debt problems.

Mr. Xi is presumably at the center of such decision-making. He has surrounded himself with officials who built their careers in part on their ability to deal with the United States and who might be damaged politically if the trade war goes badly for China.

They include Wang Huning, the party’s chief ideologue, who helped craft the propaganda message trumpeting China’s rise that is now being criticized in China for alarming the West; Vice President Wang Qishan, Mr. Xi’s most powerful lieutenant, who appears to have distanced himself from trade policy in recent months; and Liu He, the Harvard-trained vice premier handling the stalled negotiations with the United States.

The leadership can still divert criticism by blaming the United States. So far, it has not ratcheted up anti-American propaganda beyond the usual volume nor encouraged protests or boycotts of the sort directed at Japan in the past.

Asked on a recent afternoon about the trade tensions, a worker making digital control panels at a factory in the southern city of Zhongshan paused before she replied. “If we are going to fight a trade war,” she said, “even if my job may be affected, I will still support our country.”