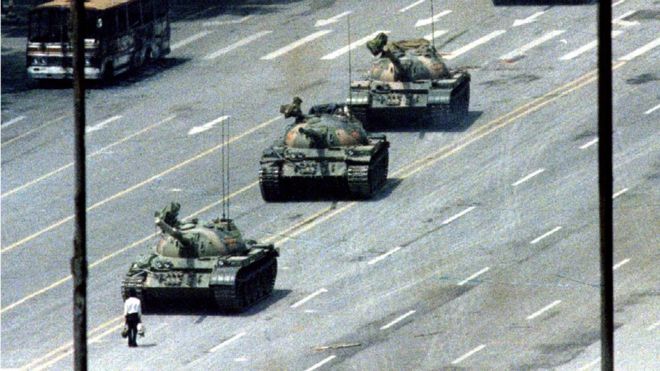 This year marks the 30th anniversary of the pro-democracy protests

A promotional video for camera company Leica has sparked backlash in China for featuring a famous Tiananmen Square image.

The video depicts photographers working in conflicts around the world, including a photographer covering the 1989 protests.

People on Chinese social media site Weibo have called for a boycott of the camera brand.

Leica has distanced itself from the video.

“Tank Man” was a lone protester who brought a column of tanks to a standstill during a crackdown on pro-democracy protesters in Beijing in 1989.

He refused to move out of the way and climbed onto the leading tank to speak to the driver. He was later pulled away from the scene by two men. What happened to him remains unknown.

Beginning with the caption “Beijing 1989”, the Leica video features a photographer taking the famous image. The “Tank Man” can be seen in the camera’s lens.

Users on Chinese social media site Weibo have been forbidden from commenting on recent official posts by Leica. However some people are managing to post carefully worded comments on earlier official Leica posts, BBC Monitoring has found.

A search of the hashtag Leica shows that 42,000 users have left posts on Weibo but only 10 are available to view.

Some comments urge users to “boycott the camera” and joke about the company being linked to “patriotic Huawei”.

Chinese technology giant Huawei has been restricted by the US and other countries over security concerns in telecommunications networks. Consumers in China have rallied around the company, which uses Leica technology in its latest mobile phones.

A spokeswoman for Leica told the South China Morning Post that the film was not an officially sanctioned marketing film commissioned by the company. However it features Leica cameras and the company’s logo at the end of the footage.

They added that the company “must therefore distance itself from the content shown in the video and regrets any misunderstandings of false conclusions that may have been drawn”.

How China keeps Tiananmen off the internet

China has banned all activists’ commemorations of the 1989 Tiananmen incident for years and has strictly regulated online discussion of it.

If users search for “Tiananmen” on domestic search engines like Baidu or social media platforms like Sina Weibo, they only see sunny pictures of the Forbidden City in Beijing. If any pictures of tanks running along Chang’an Avenue are visible in image searches, they are only from Victory Day parades.

Hundreds of references to 4 June 1989 are banned all-year round by thousands of cyber police, and Weibo steps up censorship of even seemingly innocuous references to the incident on its anniversary.

Simple candle emojis, and number sequences that reference the date, such as “46” and “64” (4 June) and “1989” (the year of the protests), are instantly deleted. Small businesses also struggle to market items on 4 June every year, if their sale price is 46 or 64 yuan. Such advertising posts are swiftly removed by nervous censors.

But creative users always find ways of circumventing the censors. For example in 2014, when Taylor Swift released her 1989 album, the album cover featuring the words “T.S.” and “1989” was seen as an effective metaphor by users to talk about the incident – as T.S. could be taken to mean “Tiananmen Square”.

More than one million Chinese students and workers occupied Tiananmen Square in 1989, beginning the largest political protest in communist China’s history. Six weeks of protests ended with the bloody crackdown on protesters of 3-4 June.

Estimates of the death toll range from several hundred to more than 1,000.

China’s statement at the end of June 1989 said that 200 civilians and several dozen security personnel had died in Beijing following the suppression of “counter-revolutionary riots” on 4 June 1989.