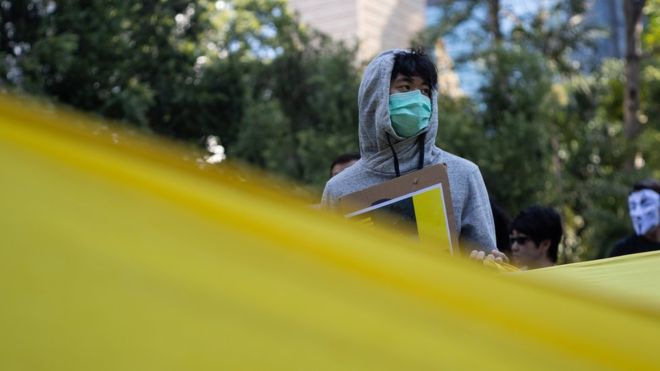 The protests began in June, and show little sign of stopping

China’s leaders are signalling that they are preparing to change how they deal with Hong Kong, following months of pro-democracy protests.

Shen Chunyao, director of the Hong Kong, Macau and Basic Law Commission, told reporters they were looking at ways to “perfect” how Hong Kong’s chief executive is appointed and removed.

He did not elaborate on what exactly might change.

The statement could further inflame protests, which began in June.

There were demonstrations on Friday and more are expected over the weekend.

Initially protesters were demonstrating against proposals to allow extradition to mainland China.

These proposals have now been dropped, but the protests widened to include four more demands, including the implementation of complete universal suffrage (the right of almost all adults to vote in elections).

The protests, the largest since President Xi Jinping took office in 2012, have presented a serious challenge to China’s leaders, who have painted the demonstrators as dangerous separatists and accused foreign powers of backing them.

A four-day plenum session in the Chinese capital this week clearly had the Hong Kong political crisis way up on its agenda.

Shen Chunyao, a senior official from the Hong Kong and Macau Basic Law Committee, was one of the speakers at a press conference after the session. This is no accident.

He said they were looking to “perfect” the system of appointing and replacing Hong Kong’s leader. What does that mean?

The chief executive is currently selected by a committee stacked with pro-Beijing loyalists; protesters are calling instead for direct elections to choose the city’s leader. There’s nothing to indicate that any changes would be moving in the direction activists want but, in truth, we simply don’t know and the party seems to like it that way.

The communiqué also pledged to establish “a legal system and enforcement mechanism for safeguarding national security” in Hong Kong.

Analysts think this could mean the central government introducing national security laws which could be imposed on Hong Kong from Beijing but – again – who knows?

Mr Shen said “of course” the topic of the protests was discussed at the plenum, a meeting of China’s ruling Communist Party leaders which took place behind closed doors this week

But protesters say those freedoms have eroded. Meanwhile, the plenum has emphasised that “one country” is the foundation for “two systems”, according to news agency Reuters.