If you’ve noticed any of these ads cropping up on your social media feeds lately, you’re being targeted by a foreign government.

While both Facebook and Twitter are banned in the mainland, it represents the Government’s desire to take control of how the Hong Kong protests are spun — not just to the country’s own citizens but around the world.

“See the truth,” reads one Facebook post, accompanied with images of Hong Kong protesters appearing to engage in violence and disruptive behaviour.

One of the images refers to the demonstrators as “the Hong Kong cockroaches”. 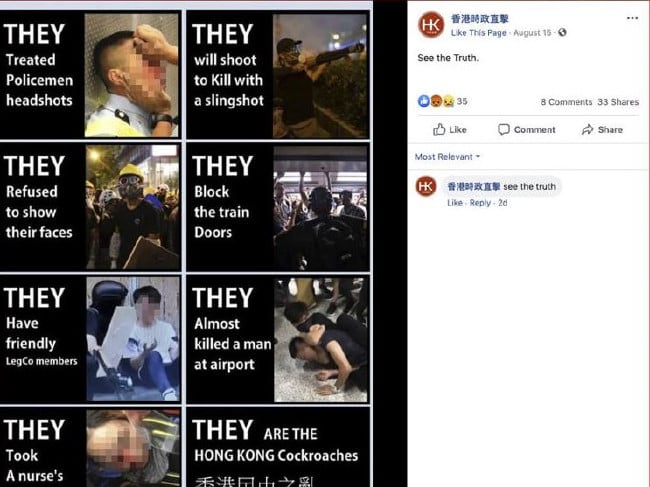 Chinese state media’s coverage of the demonstrations has largely targeted mainland citizens and demonstrators in the southern territory through inspiring nationalism in the former and threatening the latter.

But these posts appear to be directed at social media users in Western countries — not just mainland citizens living abroad, but everybody — rather than the Hong Kong demonstrators.

For example, a Facebook ad by Xinhua News challenges US House Speaker Nancy Pelosi to “fly to Hong Kong to see what the true facts are” in response to her recent critical remarks of the Chinese Government’s suppression of the demonstrators.

Another post featured a video called “Hong Kong in the eyes of an Australian”. It included footage of an unnamed Australian traveller, who went viral when he lashed out at protesters after missing his flight during airport demonstrations last week.

In the viral video, the man told the demonstrators to “get a job” and said “Hong Kong is a part of China”.

Xinhua included footage of a subsequent interview in which he spoke about the incident and reaffirmed this statement.

In another example, the China Daily promoted a tweet with a cartoon captioned “Public enemy”. It shows a lone protester holding a molotov cocktail being outweighed on a scale by a group of disapproving people labelled “HK PEOPLE”, implying a silent majority is opposed to the demonstrations.

Another tweet — a video by Xinhua News — says Hong Kong citizens have described China as “our home” and “our motherland” and are calling for the demonstrators to stop protesting.

Social media platforms have since announced action against such posts.

Twitter said it would no longer accept advertisements from “state-controlled news media entities”.

“We want to protect healthy discourse and open conversation,” the network said in a statement posted on its website. “We believe that there is a difference between engaging in conversation with accounts you choose to follow and the content you see from advertisers in your Twitter experience which may be from accounts you’re not currently following.”

The company said the new policy would only apply to “news media entities that are either financially or editorially controlled by the state”, not including taxpayer-funded entities or independent public broadcasters.

Twitter did not name any Chinese state media outlets directly.

But it did come just hours after the company acknowledged it had identified a network of 936 active accounts that “were deliberately and specifically attempting to sow political discord in Hong Kong, including undermining the legitimacy and political positions of the protest movement on the ground”.

Facebook subsequently identified about a dozen pages and groups that were tied to Chinese activity regarding Hong Kong.

The accounts “engaged in a number of deceptive tactics”, Facebook said, including using fake accounts, and the Facebook investigation “found links to individuals associated with the Chinese Government”. 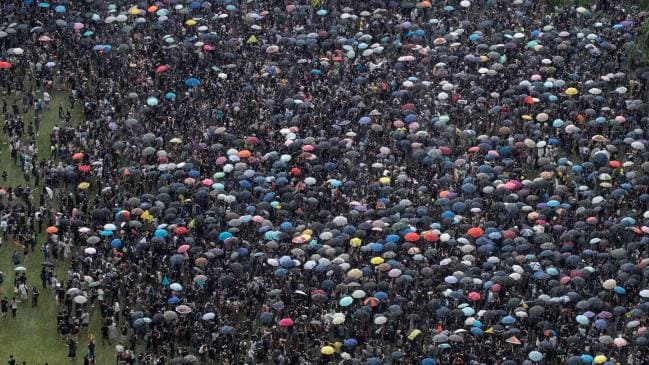 The social media crackdown comes as the Hong Kong protests have entered their 11th consecutive week.Source:AFP

The social media crackdown comes as the Hong Kong protests hit 11 weekends in a row.

According to the pro-democracy demonstrators, the Sunday protests drew 1.7 million people.

The demonstrations started as a protest against a proposed extradition bill that would send criminal suspects to China but have since become more widely about opposition to the mainland’s growing political influence overall.

When Hong Kong was handed over from Britain to China in 1997, it was agreed the territory would be allowed to maintain its unique freedoms and civil liberties for the next 50 years — a deal the protesters believe has not been honoured by Beijing.

The protesters believe China has gradually been whittling away their liberties since the handover, including by suppressing the “Umbrella Movement” in 2014 and by kidnapping five Hong Kong booksellers.

With the ongoing protests, demonstrators are now pushing for the right to elect their own government and an independent commission to investigate police brutality. They also want the territory’s leader, Carrie Lam — who was hand-picked by the Chinese Government — to resign.