China’s People’s Liberation Army based in Hong Kong has released a video showing footage of “anti-riot” exercises as its top brass said violence is “absolutely impermissible” — an undeniable warning to civilian protesters. 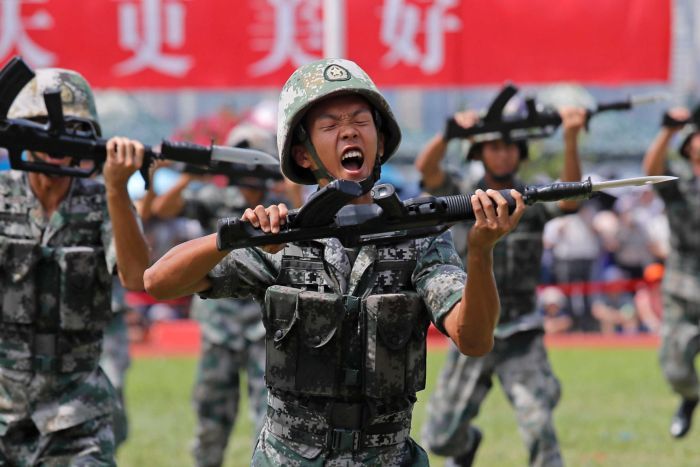 The PLA has remained in barracks since political protests began in April, leaving Hong Kong’s police force to deal with the massive and often violent confrontations in the Asian financial hub.

In one sequence in the PLA video, titled “anti-riot drill footage”, ranks of troops advance with shields and truncheons, firing rifles into the air.

Tear gas and water cannons rain down on their opponents, as armoured personnel carriers with battering rams raced forward, and troops lay barbed wire coils on the ground.

Some of the opponents portrayed in the video are wearing helmets and masks, much like those worn by protesters who have regularly taken to Hong Kong’s streets during the past two months.

“All consequences are at your own risk,” one soldier shouts in Cantonese.

A red flag with the words “Warning. Stop charging or we use force” was also held aloft, similar to what Hong Kong police have used during actual protests.

At the end of the clip, several protesters with their hands cuffed can be seen being taken away.

PLA will ‘become a stabilising pillar for Hong Kong’ 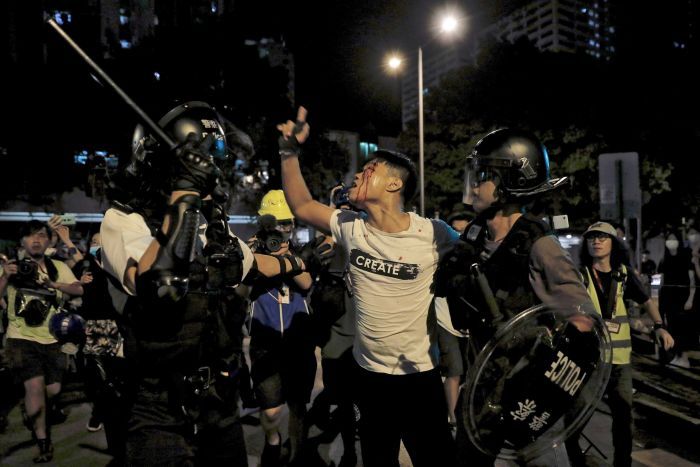 PHOTO: Protesters gathered outside a police station to protest some of their detained collegues. (AP: Vincent Yu)

Hong Kong has been plunged into its biggest political crisis since the former British colony’s return to Chinese rule in 1997, with a wave of protests against a now-suspended extradition bill that would have allowed people to be sent to mainland China for trial in Communist Party-controlled courts.

On Wednesday, 44 people were charged with rioting — the first time authorities have resorted to using the rioting charge — which carries a maximum penalty of 10 years imprisonment.

“We believe that the Hong Kong garrison of the People’s Liberation Army will continue to become a stabilising pillar for Hong Kong’s long-term prosperity and stability,” Chinese Foreign Ministry spokeswoman Hua Chunying said at a briefing in Beijing on Thursday when asked about the video.

A former British colony, Hong Kong was returned to China in 1997 on the principle of “one country, two systems”.

The framework promises Hong Kong certain democratic freedoms not afforded to the mainland.

In recent years, however, Hong Kong residents have complained that Beijing is increasingly encroaching on these freedoms. 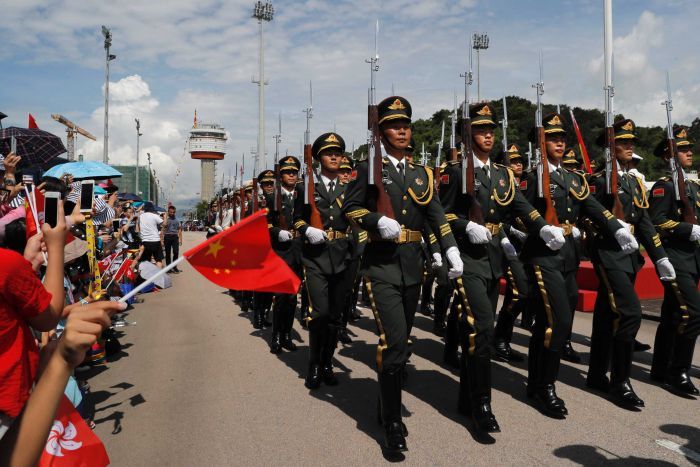 PHOTO: The PLA has remained in barracks since protests began, leaving Hong Kong’s police force to deal with the protests. (AP: Kin Cheung)

“And we firmly support the patriotic people in Hong Kong in defending the rule of law in Hong Kong and safeguarding national sovereignty and security and Hong Kong’s prosperity and stability,” Mr Chen said.

The world’s largest standing army, the PLA is the military wing of the ruling Communist Party with explicit instructions to follow the orders of the party, not the government.