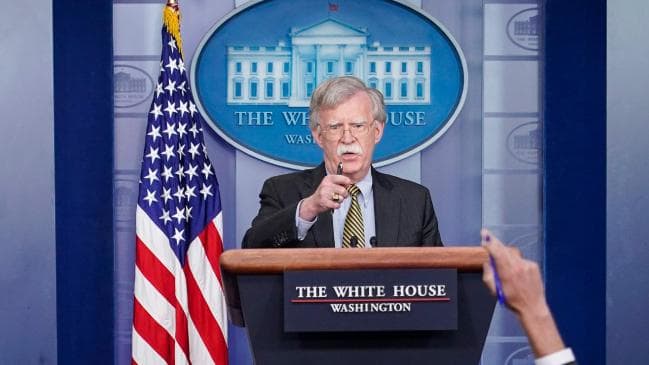 CHINA has issued a stern new direct warning to Australia, saying we’re walking a “tightrope” between the US and China.

In a blistering editorial, state media outlet The China Daily warned the nation not to be “led by the nose by America, cautioning the Morrison government against adopting a “Cold War” mentality.

It said there was a “fragile peace” in the region which could be “shattered by the slightest misstep”.

The editorial was written in response to renewed criticism from Australia and Japan over China’s position in the South China Sea.

It comes after President Donald Trump’s national security adviser, John Bolton, said the Morrison government would be increasing its naval co-operation with the US in the tense region.

Speaking in a radio interview on the Hugh Hewitt Show aired last week, Mr Bolton said Mr Trump believed China had taken advantage of the international order for far too long and not enough Americans had stood up to it.

“We’ve got to do more first to establish for the Chinese that we do not acknowledge the legitimacy of any of (their claims to the South China Sea),” Mr Bolton said.

“They’ve never seen an American president this tough before. I think their behaviour needs to be adjusted in the trade area, in the international, military and political areas, in a whole range of areas,” he said.

He also reiterated that the US was committed to keeping international sea lanes open.

“This is something the Chinese need to understand,” Mr Bolton said. “We’re going to do a lot more on that.

“I think we could see more exploitation of mineral resources in the South China Sea with or without Chinese co-operation. They need to know they have not achieved a fait accompli here. This is not a Chinese province and will not be.”

Last week, Canberra and Tokyo together condemned Chinese government militarisation in the region.

already taken hold of the US, shape their actions,” The China Daily editorial said.

“(Australian leaders) should realise the full significance of a return of the full-scale mistrust of the Cold War, as it will create a fragile peace that risks being shattered by the slightest misstep.

“They should be aware that letting the US lead them by the nose as it pursues a confrontational strategy toward China is really not in their best interests.”

If a Cold War-like scenario does play out between the US and China, Australia will be in a vulnerable position, given China is our largest trading partner and the US is our key strategic alliance partner.

So far, Prime Minister Scott Morrison has sought to maintain the peace with both nations.

Last month, when American and Chinese vessels narrowly avoided collision in the South China Sea, Mr Morrison said Australia would to provide a calming influence on rising tensions between the two countries.

“We’re cool heads in this situation,” Mr Morrison told 6PR. “Times of uncertainty are exactly that and it’s our job to work with everybody to reduce that uncertainty. That’s what we’re doing.”

He said Australia has strong relationships with both countries, vowing to work for the best strategic outcomes for the national interest.

“The prosperity of our region has been a major boon for Australia and we want to see that continue,” Mr Morrison said.

Donald Trump has escalated his feud with China into a full-press offensive that has drawn comparisons to the Cold War. Now the question on both sides of the Pacific is, how will it end?

In recent weeks, Mr Trump has slapped on $250 billion worth of tariffs, boosted military support for rival Taiwan, accused China of interfering in US elections, stepped up denunciations of Beijing’s human rights record and curtailed its access to US nuclear technology.

The real estate mogul, who early in his tenure had described Chinese President Xi Jinping as a friend, was generally presumed to be most interested in trade as he has repeatedly vowed to ramp up US factory production by fighting back the flow of cheaper manufactured imports.

But his administration has expanded its pressure campaign to virtually all fronts, a strategy unprecedented since the time the United States and China established diplomatic relations four decades ago.

“It is a full-frontal assault by the US on China,” said Elizabeth Economy, Director for Asia studies at the Council on Foreign Relations.

“There is a general sense in Washington that China is simply too big now, it’s simply too large as a country and as an economy, to allow it to continue to violate all sorts of expected international trade and investment norms,” she said.

Ms Economy said that the United States was also struck at how Xi has “presented a very different China to the world” with a “much more ambitious and expansive foreign policy.” “The US and other countries say, ‘Okay, this is the China we have to deal with, not what we anticipated ten years ago.’”